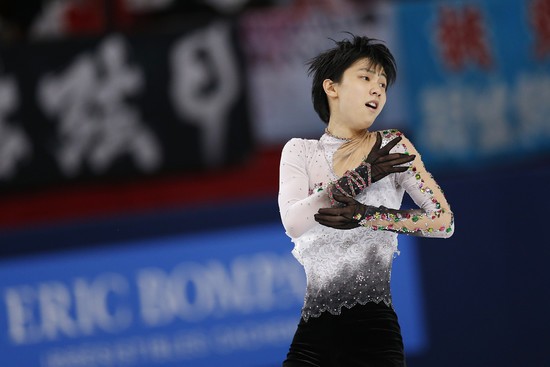 Yuzuru Hanyu at Internationaux de France 2013. The All Japan Figure Skating Championships in 2012 provided Yuzuru Hanyu with his fifth appearance at the competition. Although his score in the free skate was 4.81 points lower than Daisuke Takahashi's, Hanyu gained 97.68 points for the short program (albeit unofficially) ─ something he had achieved regularly in the Grand Prix series that season, scoring more than 95 points for his free skate many times ─ to leave him a total of more than 280 points, enough to win the championships for the first time.

Hanyu then planned his next step ─ to catch up with Patrick Chan, who had triumphed at the World Figure Skating Championships three times in a row since 2011 and was called "the absolute champion". When Hanyu won the men's singles gold medal at the Sochi Olympics, he revealed that the fierce competition with Chan at the Grand Prix series had been a key factor in helping him achieve glory.

"In terms of expressiveness, I think the likes of (Tatsuki) Machida and (Daisuke) Takahashi are superior to me. Therefore, I need to catch up and overtake rival skaters in order to improve my weakness," he said after winning gold at Sochi, illustrating how he regarded participating in those competitions as great opportunities to learn from his rivals.

In the 2013-14 season Hanyu finished second, behind Chan, in the first round of the Grand Prix, Skate Canada International. He made some errors in the short program and the free skate that disappointed him even though he made it to the podium.

But in the second round, Internationaux de France, Hanyu started satisfyingly. He moved sharply at the official training and maintained that feeling for the short program scheduled that evening.