Yuzuru Hanyu feels the pressure and happiness of competing with rivals. 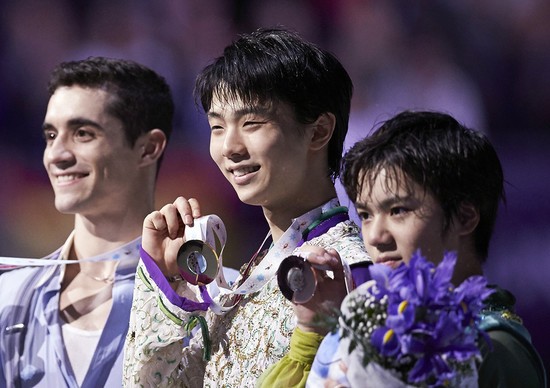 Yuzuru Hanyu won the Grand Prix Final in 2015 At the World Figure Skating Championships in 2015, Yuzuru Hanyu was aiming for consecutive triumphs despite lacking in preparation time due to injuries and surgery. The winner, however, was Javier Fernández, whose score was 2.82 points higher than Hanyu's.

The presence of Fernández was one of the reasons Hanyu became a pupil of Brian Orser at the Toronto Cricket Skating and Curling Club from 2012. The Spanish skater had been coached by Orser since 2011 and managed to finish third behind Daisuke Takahashi at the Grand Prix of Figure Skating Final in the same year. In the final, he cleanly executed a quadruple toe loop in the short program and successfully performed a quadruple toe loop and a quadruple Salchow in the free skate. As a result of this, Hanyu thought that it would be beneficial to train with him in order to improve his skills, including quadruples and especially the Salchow.

In the Grand Prix Final in 2015, Fernández came second in the short program and then scored 201.34 points with two completed quadruple Salchows in the free skate. Although Hanyu won this tournament with a record score, he confessed afterward to feeling "pressure (from Fernández)".

On the wall around the rink of the Toronto Cricket Skating and Curling Club are listed the names of the Olympic and World Figure Skating Championships medalists who were based there, including the gold medallist of Sochi, Hanyu, and the gold medallist of the World Championships, Fernández. At the time, Hanyu said, "Fernández should be motivated to see my name on the wall, and the same goes for me. I am motivated by the frustration of seeing his name." He also said that feeling such emotion day-to-day made him "privileged".