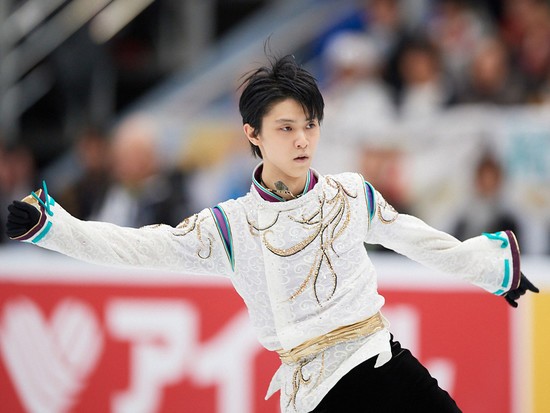 Yuzuru Hanyu at Rostelecom Cup 2017. At the last competition of the 2016-17 season - the season prior to the Pyeongchang Olympics - Yuzuru Hanyu felt his composition including five quadruple jumps of three kinds was progressing. At the same time, he admitted to some doubts though, as it wouldn't be possible for him to perform multiple triple jumps if he chose this composition. Hanyu recognized that triple jumps were his main weapon.

However, he announced he would taking the challenge on at an open practice in August 2017, right before the season of the Pyeongchang Olympics, at which he would be aiming for consecutive victories. The composition was incredibly difficult and included five quadruple jumps, three of which were in the latter half and included a sequence of Salchow and toe loop. In the short programme, he decided to go with a triple Axel and then a sequence with a quadruple toe loop and triple toe loop in the latter half. The song he chose for the short programme was Ballade no.1 g-moll Op.23, while for the free skate he opted for SEIMEI. He had performed to both before.

For the The Autumn Classic International, the first competition of the season, though, Hanyu partly adjusted the programme due to injuring his right knee 10 days previously. Nevertheless, he earned the full three Grade of Execution (GOE) points on a quadruple Salchow and triple toe loop in the beginning of the short programme. The GOE on a quadruple toe loop and triple toe loop at the final phase both gained 2.8 points, giving him 112.72 points for the short programme, which surpassed his world record at the time.

In the free skate, having omitted a quadruple loop, he jumped three triples of Lutz, loop, and flip from the beginning, and then a sequence of three quadruples and two triple Axels in the latter. However, he missed some of these on account of placing too much focus on the latter jumps.

Hanyu explained the composition of the free skate afterwards.