Yuzuru Hanyu thinks outside of the box and taking on difficult challenges. 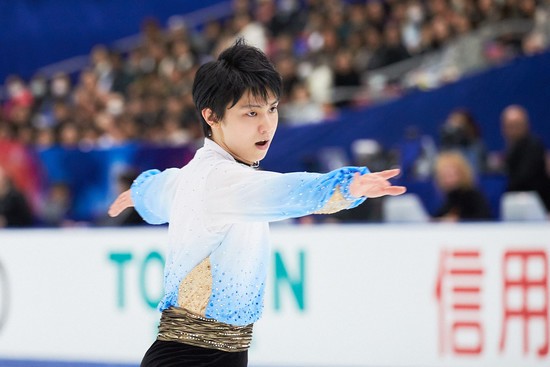 Yuzuru Hanyu at NHK Trophy 2015. At the Skate Canada International in 2015, Yuzuru Hanyu lost to Patrick Chan of Canada, who had just come back from a year's rest. The failure to win the title frustrated Hanyu, but that disappointment gave him energy for the next challenge.

One month later at the official training for the NHK trophy, Hanyu showed the new composition for his short programme, which included a quadruple Salchow at the start and then a quadruple toe loop + a triple toe loop. At the press conference afterwards, he announced that he would be performing the composition at the actual competition, explaining the reason as follows.

"I included a quadruple in the latter halves of both the short programme and free skate at the Skate Canada International and then thought, "I could attempt a harder one". My feeling was good when I did a spread eagle to a quadruple Salchow or a quadruple toe loop, which are difficult compositions, but I would like to try it. Though Brian (Orser) was surprised and said, "Will you start now?!", because putting a quadruple in the latter half had been in my thoughts while training to include two quadruples in my short programme, I made the decision when getting back to Toronto from the Skate Canada International."

Hanyu had initially wanted to try a quadruple jump in the latter half of his short programme in the previous season and attempted it in the short programme at the Cup of China, but he experienced an accidental collision with another skater before the free skate, meaning he only managed to attempt it once that season.

Therefore, Hanyu challenged himself again in the 2015-16 season, starting with his first competitions, the Autumn Classic International and the Skate Canada International. Having made errors on both occasions, Hanyu decided to attempt a harder composition because he thought that, "If it goes without any mistakes it is just repeating last seasons' challenge and could therefore not be called much of an improvement from then".