Yuzuru Hanyu always tries hard to overcomes what he was yesterday. 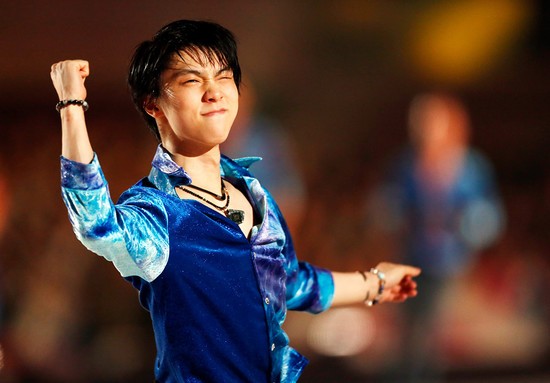 Yuzuru Hanyu at Fantasy on Ice 2015. In the 2014-15 season, Yuzuru Hanyu was thinking about embarking upon further improvements from the previous season, that of the Sochi Olympics - not only attempting to include three quadruple jumps in his free skate but also trying to add one in its latter half, which would multiply the base value by 1.10. Not only that, as training for that target he also aimed to include a quadruple in his short program.

However, it ultimately wasn't to be in that season. After pulling out of the Finlandia Trophy due to back pain, Hanyu collided with Han Yan of China in the six-minute training right before the free skate at the Cup of China in November.

Following that, although Hanyu won the Grand Prix Final with the same composition as the year before, he was diagnosed with a urachal remnant after winning the All Japan Championships which required a month of rest with surgery. Still hopeful of trying a quadruple in the latter half of his free skate for the World Championships in March, he then twisted his ankle at training which called for another two weeks of rest and meant he needed to skip his initial plan.

After finishing the World Team Trophy, the final competition of the season, Hanyu confessed of his ability to try his new challenges that, "It's frustrating I couldn't perform completely at all," and spoke of the difficulties when it came to executing different kinds of jumps as follows.