Jay Bothroid says, “Japanese football players should be more selfish to be strikers”.

You could reply that the skills required include speed, calmness, precision and so on but foremost in Jay Bothroyd's mind is "being selfish". 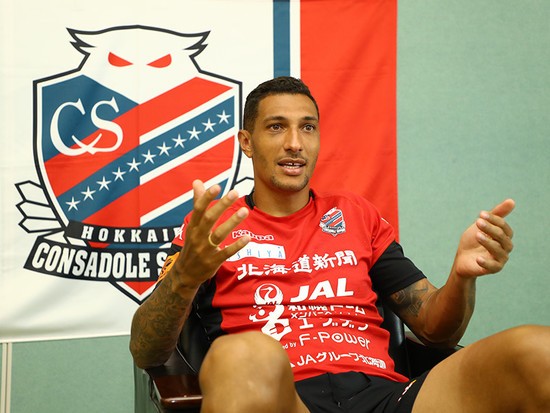 Jay Bothroyd playing as a striker for J1 League club Hokkaido Consadole Sapporo The former England international, who netted many times in the Premier League and Serie A after developing at Arsenal's academy, thinks strikers should be egotistic, in a positive way.

"My playing style has changed throughout my long career," Bothroyd said. "Especially under 'Mischa' (Mihailo Petrovic, the manager of Hokkaido Consadole Sapporo), where I've learned the importance of the passing game and combinations with teammates. But I still have an ego for finishing. When facing the goal, I would only pass the ball if a teammate is clearly in a better position, because I believe I have the best finishing ability in this team, and take responsibility for scoring. For that reason, I think strikers need to be selfish."

Having played five seasons in Japan, the 37-year-old Bothroyd feels the quality of the J-League is "quite high". Although the top league in Japan does not have such a long history, he doesn't think the standard of all round performance is very different to that in the European leagues. He also believes there must have been a lot of effort centred upon diligence and passion to enable such fast improvement over the past few decades.