The reason why Fernando Torres decided to play in Japan.

After his retirement from professional football, Fernando Torres has returned to Spain but still remains closely connected with Sagan Tosu, his last club, as an advisor. On 23rd August 2019, he played his very last game against Vissel Kobe, in which his friends Andres Iniesta and David Villa, saw off their World Cup winning teammate with a goal rout (Kobe beat Tosu 6-1). Though Torres and his family went back to Spain immediately after that, he wants to "help Tosu, which has huge potential" and "try to come to Japan as much as I can" to advise on training, youth development, and other areas. 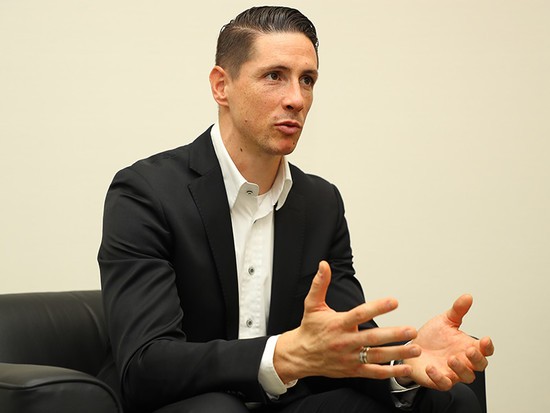 Fernando Torres who is a former professional footballer who played as a striker. In late November 2019, we had the chance to talk when Torres came back to Japan for the first time since his retirement. He visited Mitsuru Murai, the chairman of the J-League, and in his presence, I asked Torres the reason he decided to come to Japan to conclude his professional career.

"When the contract with Atletico Madrid expired," Torres began, "I was thinking of the next destination and, to be honest, Japan was not my first choice at the time. There was one guy who urged me to play in Japan though, and because of him I started to think about the J-League and researched Japan. When I asked my friends who knew about Japan, everybody said it is fantastic country - respect, kind people, high privacy. "

"Then I started to watch the J-League and realised the standard is high. And my family told me it was probably best to go to Japan due to the quality of life and its football. We knew, however, it would be a challenge as a person and a footballer because the culture and lifestyle are very different from that we had become accustomed to. Looking back now, it was a good decision. I played in the J-League for about a year and finished my career here. Everything went well and I am happy now."

Then, what was his first impression of Japan and the lifestyle?