I’m not the Thai Messi,I’m Chanathip!! The superstar from Thailand says with a grin.

I asked a question to Chanathip in Japanese, which his interpreter then translated into Thai. The Thailand superstar smiled and thought about the question for a while, before staring into my eyes and replying. 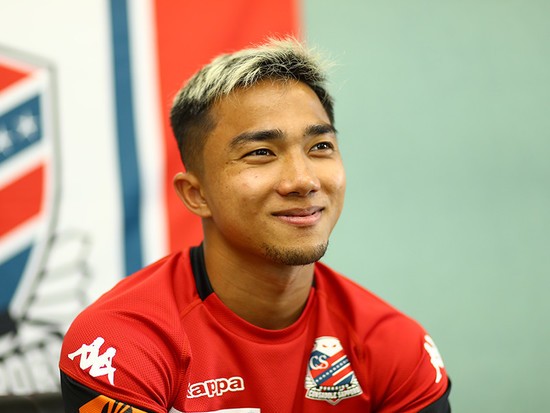 Chanathip playing for J1 League club Hokkaido Consadole Sapporo Just like his gaze, I'm sure he must have trained and played football uprightly since childhood, always with a smile and a positive attitude.

"As you might know, Thai people are cheerful and always smile," he said. "We like to share excitement with others and get to know new people."

In the summer of 2017, the diminutive attacker came from so-called "the land of smiles" to Japan to play for Hokkaido Consadole Sapporo. At the time, Chanathip's value was doubted by some, standing as he does at just 158 centimetres and weighing a mere 58 kilograms. Could a player who only had professional experience in Thailand shine in the J-League? Is he too small after all?

Chanathip has completely silenced those critics. The maiden Thai J-Leaguer adapted to his new environment in the first six months, before becoming a key player in the team's attack and scoring eight goals in 30 J1 matches in 2018. During that season, it was agreed that his contract would be converted from a loan to a permanent deal from the following year, and he was chosen by his teammates as Sapporo's player of the season as well as being selected in the J1 team of the year.