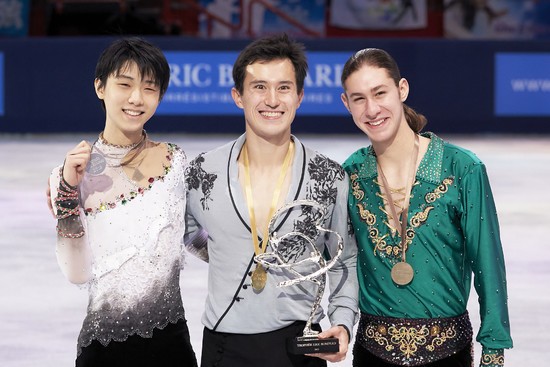 Patrick Chan won the Internationaux de France 2013. Although he said, "The first quadruple toe loop in the short program was not good enough for me" because of a slight error on landing, he received a high evaluation and 2.00 Grade of Execution (GOE) points. He also gained additional points for all other elements, making a total of 95.37, his highest at the time.

At the beginning of the season Hanyu repeatedly scored record points, but after the new year he made many errors. He felt that his skating was reaching perfection, but there was still frustration. "I think my body moves well and I have trained hard, but I'm only 0.03 points higher than last year. I have to work harder."

At that time Chan, the three-time consecutive winner of the World Figure Skating Championships, was performing better than Hanyu. At the Internationaux de France Chan completed all his skates and jumps, including a quadruple toe loop + triple toe loop in the beginning, earning higher artistic elements than Hanyu and being awarded a total of 98.52 points, the-then world record, even though his technical elements score was 0.38 points lower than Hanyu's.

After the short program, Hanyu's was 3.15 points behind Chan.

"Three points difference is big," Hanyu said. "When the gap in points for the five components (artistic elements) is huge like this, there's nothing I can do. But I'm still in contention, and it is much better than in Canada where I could only aim for second place."